How We Achieved A 5,138% ROAS For Vinnies Australia (And Won A Search Engine Land Award)

Reef is delighted to announce that we have received a second award in less than a week!

Last week (Thursday 15th October), we were crowned the winners of the 2020 award for Acquisition Marketing (NSW) by the Australian Marketing Institute (AMI).

Today, it is our work for the fantastic charity Vinnies that gets recognised, as we receive the award for the Best Overall SEM Initiative – Small Business category at the Search Engine Land Awards.

We are incredibly proud of this achievement especially given that this is one of the most competitive global awards in our industry.

Below is our case study for this particular campaign and the exceptional results that were achieved.

It works to shape a more just and compassionate society as well as combat social injustice across Australia.

Internationally, the organisation is present in 153 countries and counts over 800,000 members. Reef has been looking after Vinnies’ digital marketing activity since July 2018.

Last summer (November 2019 to February 2020), colloquially known as the Black Summer, Australia experienced the worst bushfires ever recorded as a result of record-breaking temperatures and months of severe drought.

The intensity of the bushfires devastated a total of 18.6 million hectares, an area larger than the 115 smallest countries in the world.

An estimated 3 billion animals perished in the flames, thousands of buildings were burnt to the ground, hundreds of businesses were lost, tens of thousands of people were evacuated and 39 lost their lives.

An emergency appeal was launched by Vinnies Australia with the objective to provide urgent support to those families impacted by the bushfires.
There was substantial coverage and awareness of the bushfires both locally and nationally.

The role of the campaign was to drive potential donors to the landing page that had been created for this appeal, with the intention to raise as much funds as possible.

With a restricted budget and given the unprecedented nature and urgency of the appeal, we needed to adopt a digital marketing strategy that had the greatest impact and attracted the most interest, quickly and cost-efficiently.

We decided to focus primarily on Paid Search via Google Ads.

We had to rethink our approach as the target audience for this bushfire appeal was very different to the one we normally advertised to for Vinnies.

Anyone in Australia felt impacted by the bushfires and therefore everyone was a potential donor.

Moreover, the bushfire crisis quickly became a global headline which meant there was an incredible volume of media coverage and ‘noise’ surrounding the topic. There were also a large number of charities all trying to raise funds simultaneously.

We knew the key to success would be how effective we would be at identifying, reaching and engaging our potential donors.

The campaign commenced utilising the Google Keyword Planner as well as other tools like SEMRush, to research, identify and create a meticulous list of keywords that our donors would be likely to search for.

We had to be very mindful of the expected CPCs and competition levels for each keyword to avoid overspending our allocated budget.

We paid close attention to the copy of our ads to ensure it was as relevant to the search queries as possible, in line with Google’s best practices, but also contain an impactful message that would get people’s attention and interest.

We chose to make the most of the Expanded Text Ad format for this purpose.

Given the constant media coverage, we also decided to launch an emergency appeal Display banner campaign to raise awareness across the Google Display Network, targeting some of the top digital news outlets in Australia.

Analytics tracking showed this greatly supported the Search campaigns in generating traffic for keywords like “bushfire appeal” and “bushfire donations” (note that these two keywords alone would later generate 40% of our donation revenue).

Our Search campaign commenced on January 2nd, 2020 and we exhausted the budget on January 11th, 2020 – 10 days later. During this short period of time, we recorded an overall CTR of 13% indicating high-level engagement as well as relevance in the search results.

Throughout the campaign, we noticed spikes in both traffic and donations coming from Sydney and Melbourne, coinciding with days those cities were engulfed by residual bushfire smoke.

The haze presumably making the disaster feel more real and close to those living in urban locations.

To maximise our conversion potential, we raised both our bids and budget for these two particular cities on days with heavy smoke, which proved to be extremely successful.

The client allocated an additional 20% to the original budget to leverage this opportunity further.

By the end of the 10 days, the paid search activity had generated impressive results, just shy of 1,800 unique donations and an incredible ROAS of 5,138.72%.

Most importantly, we feel incredibly proud that our work has provided emergency relief to thousands of Australians in great difficulty. 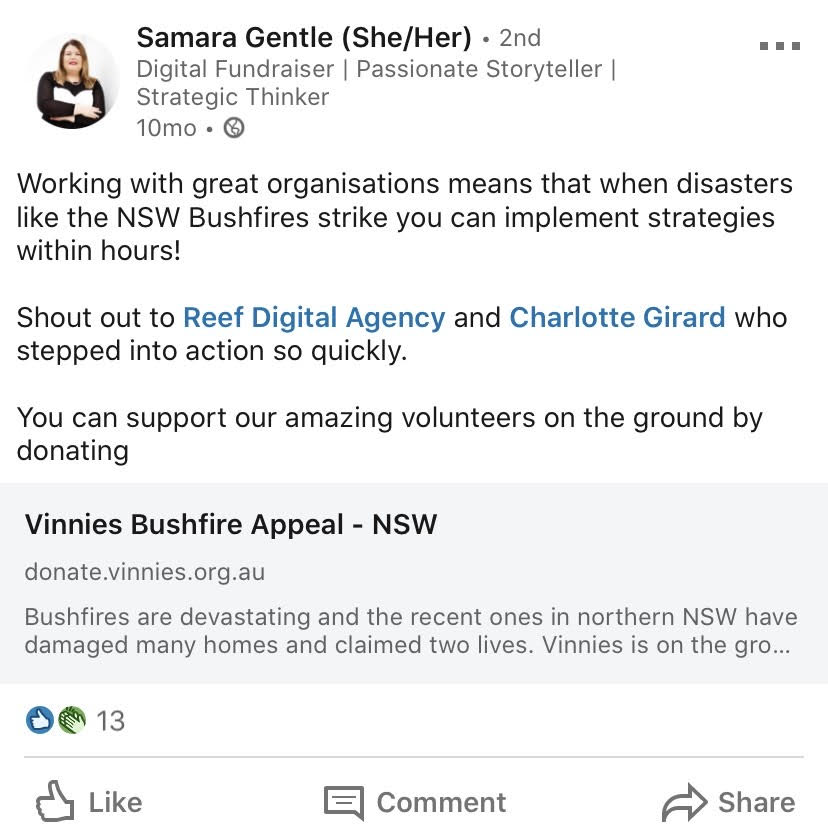