Last week, a marketing agency in the US drove billboard up to the front of the Apple store in New York city which read: “Dear Apple, Please call it the iPhone 7. Sincerely, 6S Marketing.”

No doubt, the company had taken note of Apple’s upcoming September 9 announcement, and saw the opportunity to insert itself into the hype by playing on the fact that their name is identical to that of a very strong contender for the name of the new iPhone.

Complete with a deadpan YouTube video, which has now been viewed over 11,000 times, it’s a brilliant example of how quick-thinking and a little creativity can go a long way in helping brands to piggy-back off of news and events in popular culture and in turn, generate hype around their own brand.

In the online space, it’s even more important to be up-to-the-millisecond with your marketing, considering how quickly it is (theoretically anyway) to publish new content or get a new PPC ad live.

In the case of 6S, do they really think that it will convince Apple to change the name of their hotly anticipated new toy? Probably not. But is it a chance to get some media attention and get written about? Well, we’re writing about them here on the Reef blog, so I’d say they’ve well and truly succeeded in their efforts.

Let’s start off by defining the difference between these two terms. Reactive marketing historically could be seen as something that happens in a time of “crisis” for a brand – A big new competitor may have entered the space, or a client may be unhappy with their results from the past quarter, leading to a necessary review of the whole marketing strategy. It’s a type of knee-jerk marketing that’s usually panicked and aggressive in nature rather than creative.

The Reactive Marketing that we’re talking about here, on the other hand, is all about keeping your finger on the pulse of what’s happening in the world or in your industry, and finding a way for your brand to get involved in the conversation in a lighthearted, attention-grabbing and humorous way.

So how do you harness the power of reactive marketing? Well, short of hiring out a billboard and taking to the streets with it, there are a few tips to keep in mind:

Sure, you can check out the day’s trending Twitter hashtags and send out a half-hearted tweet on the topic. But if you really want to make a splash with your reactive campaign, you’ll need to be ahead of the curve, or right on it as soon as it happens (as Tide and other brands were during the Superbowl Blackout of 2013). There are heaps of ways to do this. A tool called Spike is one tool we’re beginning to experiment with more and more. It allows you to see trends and stories just as they begin to unfold, but before they completely explode. And for big events happening in real time? Well, you better have your graphic designer on speed-dial at all times of the day and night. I jest, although big brands likely do have a design and content team sitting with their keyboards at the ready during events as big as the Superbowl, just waiting for something to happen that’s Tweet-worthy.

We all know how the marketing process sometimes goes. Agency writes content or creates ad. 5 different people have to look over it. Client has to approve. Client is understandably busy (and so they should be if they have a good marketing agency). Approval process takes 3 weeks after which the ad/content finally goes live a few weeks later.

Well folks, we’re here to tell you that this is not a time to involve your entire internal and external team in the approval process. If you’re going to be quick on your feet, only a few key stakeholders should be involved, and unless the campaign is excessively controversial (which for most brands, they shouldn’t be) then there’s no issue with speeding through the approval of your campaign in order to get it live as soon as you can. Otherwise, you run the risk of being that one guy who always arrives (unfashionably) late to the party after all the good snacks have gone. Don’t be that guy.

Stick to lighthearted topics and events

Whatever you do, do NOT choose big political issues to focus a reactive marketing campaign on, unless your company already has a very political function. Blackouts at sporting games, celebrity news and other pop culture issues are all fair game. And for goodness sake, don’t do what Bic did when it tried to release a Women’s Day campaign in South Africa. You can however, make like Bic’s rival Stabilo, and create a Reactive campaign around Bic’s blunder: 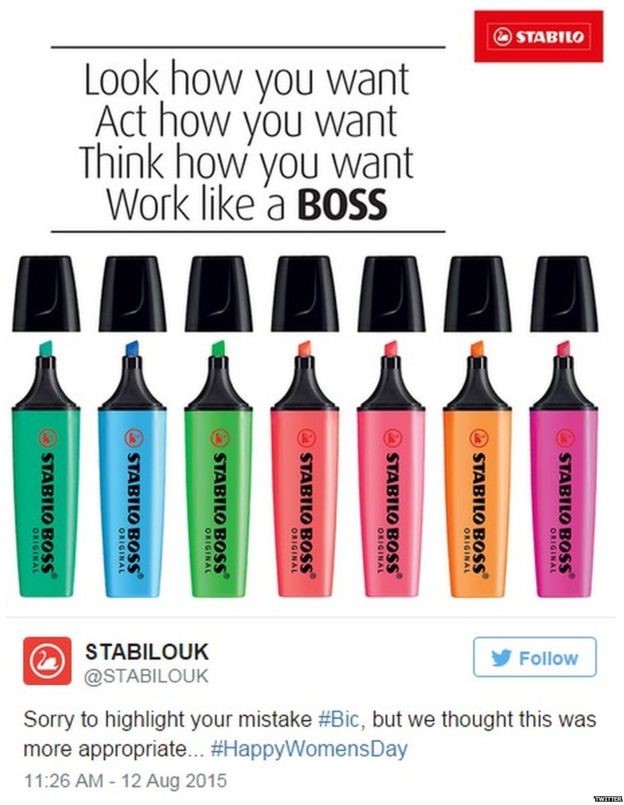