Penguin 2.0 Results Are In: Here’s What You Need To Know

On May 22, 2013, the latest major Google algorithm update, dubbed Penguin 2.0, impacted a large number of search results (2.3% of US-English queries vs. 3.1% for Penguin 1.0). But are there any major differences between the two updates that would suggest altering your strategy as a site or business owner?

Matt Cutts, head of Google’s Webspam team, announced the planned changes, but kept things customarily vague in the video. He did say that Penguin 2.0 would be more comprehensive and go deeper than Penguin 1.0. He specifically called out advertorials that attempt to pass PageRank without disclosure as something Google was going to look at with greater scrutiny. So what happened?

The day after the Penguin 2.0 update was rolled out, Searchmetrics provided a snapshot view of some of the sites that were hit the hardest. 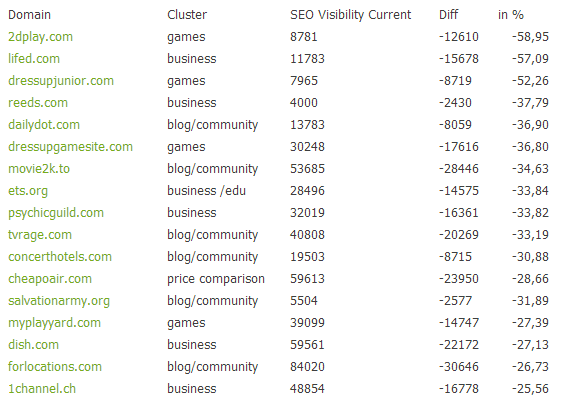 A couple of broad observations here:

One of the sites hit hard in the Searchmetrics report, Cheapoair.com, was analyzed in-depth to see what might explain the Penguin slam. In this particular case, the drop could be due to:

Another analysis of sites hit by Penguin 2.0 suggests that the algorithm change really was “deeper” as Matt Cutts had promised. Essentially, Penguin 1.0 focused on unnaturally backlink anchor text profiles pointing at the home page and this was rolled out to cover deep pages as well with Penguin 2. So if you have product or category pages with an abundance of exact match anchor text links, there’s a good possibility that Google cracked down on you (or will soon).

There’s also some good evidence that Google used Penguin 2.0 to process link disavow requests. Based on what we’re seeing, this could result in an increase in rankings, if the disavowal of links occurred as the result of a penalization and included a reconsideration request. On the other hand, if site owners used the link disavow tool more as a precautionary measure without an immediate need, then rankings dropped, as in the case of Cyrus Shepard’s kamikaze test linked to above.

A large number of queries may have been effected, but if the effects were largely felt by rankings on the 2nd or 3rd page (or deeper), as some studies suggest, then site owners may not see many real traffic changes.

Here are the main points:

Google algorithm changes are starting to feel a lot like natural disasters: initial widespread panic by some, “wait-and-see” by others, assessing the damage, totalling up the casualties. Some rush to make a recovery plan before knowing what’s damaged, what’s actually needed, and how long it’ll take to fix. Others wait around for somebody else to tell them what to do. Those hit hardest are often the ones who aren’t working closely enough with their SEO team to ensure quality content development and link building.