Let’s face it, the paid search industry is a fast-paced environment which faces constant evolution: game-changing features and tools get released, new advertising formats and technologies appear, big industry shifts occur. Looking back at 2012, it was no exception. Here’s a “last 12 months” recap on the main changes that impacted your work as a search marketer, or your SEM campaigns as an advertiser.

Sitelinks are an ad extension that allows you to add additional links within your ads. After its release, advertisers were quick to implement this feature as it can drastically improve both your CTR and conversion rate (CVR).  The enhanced Sitelinks allow you to merge 5 ads into 1 mega ad.  As per the screenshot example below, your ad’s size increases significantly, making it stand out of the crowd. These enhanced Sitelinks only show under specific conditions so can be tricky to implement. For that exact reason, they are rarely seen on Search Engine Landing Pages (SERP), which also equals to an opportunity for the most savvy marketers. 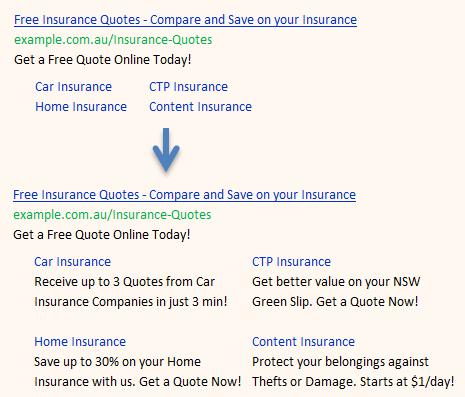 One of the most awaited changes in the Adwords interface was the separation of the Display Network activity in its very own tab. Until now, the Display campaigns had to be managed through ‘an interface designed for search’. The new tab centralises all GDN settings and data in one place. You can now review your placement performance and targeting settings (topics, interests, demographics,…)  or even link your campaigns to specific remarketing lists all in that one tab. It also improves and simplifies campaign management, allowing advertisers to access and analyse new data such as display keywords.

With the rise of Google Places, location-based searches, mobile advertising and the interest in Adwords by small business owners, the introduction of zip code targeting comes as a mini revolution. Local businesses can now target even more precisely their target audience, companies can display different shipping prices based on the ZIP location of the user, etc.
Dynamic Location Insertion has also been introduced, which means you can insert the user’s CITY automatically in your ad, using the {lb.city:Local} syntax (similarly to Dynamic Keyword Insertion).
While it can open new doors to advertisers, it can also become time/resource consuming to optimise your account at a ZIP level due to the large number of suburbs and codes (Sydney alone has around 90 zip codes!). In June 2012, Google has acknowledged the issue and released a bulk upload feature to manage large number of zip codes. 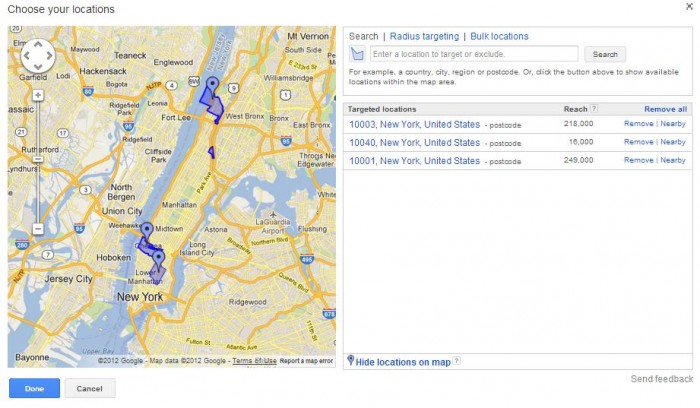 4. May 2012 – Phrase and Exact Match keywords and Misspellings

Earlier this year, Google introduced an option to allow Phrase and Exact match keywords to be triggered when close variations or misspellings are searched by users.
I have worked on accounts in the past which contained hundreds of thousands of keywords, if not millions as the strategy was to cover every single relevant variation on Exact match in order to save on CPCs. The sheer size of some accounts made them near impossible to manage properly. With this new feature, the need for every single variation is not needed. Your ads may show on slightly broader variations while not being too broad.
While this can be very useful, regular search query reviews are need to ensure only relevant traffic comes to your site.

Also, the search query report now shows you if the search queries have been added, excluded or if they are exact match or close variants of your current keywords. Positive and negative keyword expansion has just become a lot easier. 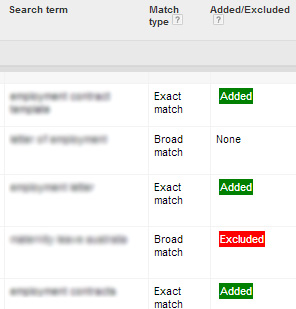 In May of last year, Adwords forced the ‘even ad rotation’ to switch automatically to ‘Optimise for clicks after 90 days’.
But many marketers had developed optimisation strategies around the Rotate evenly feature. Adwords ultimately made the ‘Rotate indefinitely’ option available again.

This Adwords update has spread both confusion and frustration around search marketers. Prior to the update, Adwords would review your ad copies once they are activated. But Google has started to review all ads in each account, including all paused or expired ads. Most accounts usually have old ads that have been paused for a while. Over time, editorial guidelines and destination URLs have changed and many of these paused ads were disapproved by Google for that reason. This sparked much debate around the impact of disapproved ads on current Quality Scores.

Probably the best overhaul that Youtube Ads received in 2012. No one can deny the popularity of Youtube, a gold mine for advertisers. With the new Adwords for video, you can easily manage your TrueView ad campaigns, targeted demographics, various ad formats (In-Search, In-Display, In-Slate, In-Stream). If you are interested in advertising on Youtube, contact us today for an initial conversation.

The launch of this feature brought panic to advertisers (and possibly joy to some users). Google brought to the user table the ability to mute ads from Google Display Network campaigns. While this can have some benefits if you’re feeling stalked by a remarketing ad campaign, many advertiser believed this could greatly impact their campaign performance and limit their reach. Six months later, it appears that Google has removed the ‘mute this ad’ option.

On the Paid Search front, a similar option exists. If a user clicks on an Adwords ad and then on the back button of their browser, an option to block all ads from the previously clicked advertiser appears. This also generated much fear in the advertising industry, and despite the fact that there is no mean for advertisers to measure the number of users blocking their ads, we believe it did not impact anyone’s campaign performance. With the flexible reach, you can now choose your reach type at adgroup level, giving you more flexibility when it comes to optimising your GDN campaigns. Note that you cannot revert back to Broad or Specific reach at campaign level once you’ve switched to Flexible reach.

Formerly known as Froogle, the Google Product Search saw a major overhaul. While it used to be a mix of both organic and paid product listings, Google is now moving towards a paid-only model. While many advertisers still haven’t tied their ecommerce site to a Google Merchant Center account we believe 2013 will be a big year for ecommerce and Google Shopping. If you need help you’re your Product Listing ads and Product Extensions in Adwords, we can help!

Linking your Google Analytics and Adwords accounts used to allow you to view Adwords performance data in the Analytics interface. Now the other way around is also possible. This helps you tie Analytics metrics with your Adwords data. Metrics include bounce rate, pages per visit, % of new visitors and average visit duration.

The Search Alliance (partnership between Bing and Yahoo!) has been renamed to Yahoo! Bing Network and have rebranded their Microsoft AdCenter as Bing Ads. Some improvements in the interface and features have been released, as well as a brand new offline campaign editor (Bing Ads Editor) which gives the ability to manage multiple accounts.

What about you, what do you think were the big game changers of 2012?
Feature image credit: ABC.net.au