Hello again! Google recently released some stats to mark the fact that it is two years since they launched estimated cross-device conversion reporting in the AdWords interface.

A primer from google about the estimated conversion reports is available here, but for the uninitiated, this group of metrics basically measures the number of times someone clicked on an advertiser’s ad on the search or display networks, finished their browsing session, then returned via another browser or device to complete a transaction.

Vivint, a smart home technology provider, always assumed it had many customers visiting on one device and converting on another–but it never had quantifiable proof. With AdWords cross-device conversion measurement, Vivint discovered mobile display was driving 23% more conversions than it was seeing via same-device measurement.

It also discovered that by taking into account these cross-device conversions, its CPA was actually 19% lower than same-device reporting indicated. As a result, Vivint has begun shifting more of its marketing resources into cross-device initiatives.

After reading the article, we wanted to dive into our client accounts and see what the metric could do for our clients, and the results we found were very interesting.

The first thing to note is that the number of estimated total conversions can vary wildly from business to business, and between verticals too. Looking through our MCC, lots of accounts recorded no estimated conversions. However several clients saw modest conversion increases of between 6-10%, while a large travel brand saw an increase of 62%! 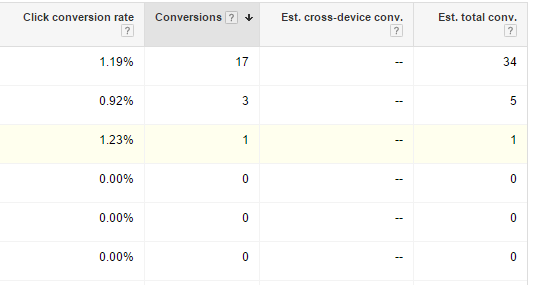 As you can see in the screenshot, this client account had 22 phantom conversions that were neither regular conversions, nor cross-device conversions. The solution came from digging down into the Google documentation to find that Google forwarding numbers used for ad extensions are also included in the data which populates the estimated total conversions column.

When estimated conversion reporting was launched in AdWords two years ago, the barrier for accounts to receive the report was very high, more than 50 conversions per day were required for Google’s algorithm to be confident of statistical accuracy in its estimations.

Judging from some of data we see in the Reef Digital MCC, the requirement for conversion numbers in an account per day has lowered significantly since then, however several advertisers still see 0 estimated conversions, so this feature will not change the world for every company just yet. However some advertisers will be able to use estimated conversions to measure the impact of cross-device conversions, or even show more value from phone number ad extensions with a forwarding number.

Computer bids: You can use estimated total conversions to guide how you set your computer bids. For example, compare the “Cost/Est. Total Conv.” to the “Cost/Conversion” that you see now. If the “Cost/Est. Total Conv.” is 10% lower, you can increase your computer bids for those campaigns by about 10% without adjusting your ROI targets.
Mobile bids: You can use mobile bid adjustments in your campaigns. This lets you change your bid for mobile ads, based on the value that those ads provide. Many advertisers look at the ratio between estimated total conversions coming from mobile versus computer and tablet to get a sense of the right bid adjustment. To get the most out of your mobile advertising, here’s a formula you can use to set your campaign-level mobile bid adjustment:
Mobile bid adjustment = 100 * [(value per mobile ad click/value per desktop and tablet click) -1 ]

If you need help or advice interpreting cross-device conversions, why not check out our AdWords services or let me know your issue in the comments section below?