Still In Denial About The Importance Of Mobile Traffic? Time Is Running Out…

I came across a good quote earlier today which, in conjunction with the latest Google announcement (more on this in a minute), prompted me to bring this important trend to your attention.

“In the near future, saying ‘mobile internet’ will be like saying ‘colour TV’ because it will just be assumed that’s how we’re communicating”

Most articles on this topic just start throwing stats at you about the number or percentage of mobile device owners, mobile traffic, device use, share of search and even by industry but that’s not what’s going to happen here.

Yes there will be some stats but only to support a key point that I’m trying to communicate.

But why should you care? Most of your conversions come from desktop and you’re not a location based business as such. Mobile doesn’t perform well for you and you have a responsive website anyway so you’re all good.

No. You’re not. Keep reading.

Google Is Splitting The Index And Making Mobile The Primary Index

Google, with the colossal amount of data it collects and has been collecting for years, is pretty damn good at predicting where things are heading online. They also have the power to influence or accelerate change.

In terms of mobile, they have made several documented moves to specifically address mobile search since early 2015 as shown in the timeline below:

Just on the most recent update: Google has always had one index that catered to people searching on all devices but now they are splitting mobile off into it’s own index which will be their primary focus.

You can still use Google to search on a desktop obviously, but the index will be entirely different and likely not updated as much as the mobile one.

This is a significant move that shows how mobile is quickly taking over the internet and how the giants are adapting to cater to mobile traffic and a wake up call why your business should follow suit.

So what? We already mentioned before that most of your conversions come from desktop and your site is responsive. Why should you care?

It’s all about user behaviour.

Firstly mobile search is growing fast while desktop search is quite flat and stagnant. A lot more people are searching on their mobile device than desktop and if your site isn’t the best user experience on a mobile device then you will probably no longer reach this traffic organically.

But so what? They don’t convert well enough anyway!

You need to see the bigger picture of what exactly is happening and look at buyer behaviour right now today.

They might not buy from mobile but they DO research on their mobile first.

Many businesses don’t have the analytics, reports or enough paid traffic to show that a very high percentage of people converting from desktop, only do so AFTER first visiting from a mobile device.

Google has an entire resource dedicated to mobile which can be found here along with what it describes as ‘micro moments’.

In Google’s words, micro-moments are:

…and they’re the new battleground for brands (their words).

The video below provides more information about this concept:

Here Come The Stats To Back Up These Statements…

In a Google study, 48% of consumers start their research on a mobile device using search engines while 33% start with a branded website and 26% on a branded app.

A staggering 93% of people who used their mobile to research, go on to make a purchase. 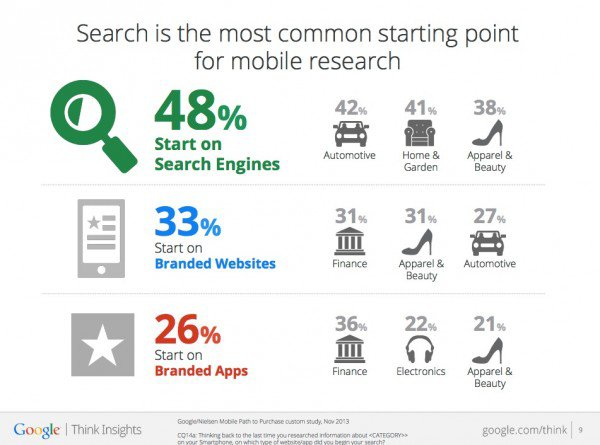 Your converting traffic is mainly desktop so what does this mean for your business?

“To increase people coming back to your site via desktop to make a purchase, you need to make sure your digital marketing efforts reach people early and consistently on their mobile devices.”

How do you do that?

Lots of different ways (get in touch if you are looking for help with your business)… the best probably being a multi-channel approach that includes regular content, social, performance media and email campaigns to meet buyers at their ‘micro moments’, build an audience and make them aware of your brand and products while bringing them back to the site to make a conversion at a later stage.

Don’t think your competitors are doing this?

Google is about to split their index for the first time and separate mobile search traffic. 61% of users are unlikely to return to a mobile site after a poor experience and 40% visit a competitor’s site instead. (source).

The mobile phone is set to become the new credit card.

Google and Apple both have mobile payment systems set up. These payment systems are starting to integrate into retail as we speak so I think it is safe to expect that in the next couple years, your phone as a credit card will be the norm.

Mobile conversion rates are increasing and as soon as the mobile wallet takes off, expect conversions from mobile devices to soar.

Mobile users are also usually logged in to their social networks which if you have the right calls to action on your site, makes it very easy for them to provide you with their email address, leave a review or share your content.

In summary, mobile traffic is huge and it’s value is increasing as technology and behaviour develops. You have to be insane not to seriously factor mobile traffic in your marketing plan.